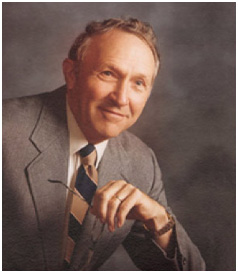 He had previously worked rewinding motors for the streetcar company. Gene started out answering the phones and gradually began estimating. Furlong did a lot of service work on the big signs on hotels and Gene started repairing and making neon tubing for these signs.

Gene also drove the delivery truck. He had been working with tools for about one year when he joined the service during World War II.

Gene went back to work at Furlong Electric upon his return from the war. Mr. Furlong was ill so they worked out a buy-sell agreement and changed the name to Furlong and Baker in 1948. The buy-sell agreement was for a 10-year period and at the end of 10 years, Gene would own the business. One year into the agreement, Mr. Furlong passed away. A few years later the name was changed to Baker Electric. Baker Electric, Inc. was incorporated in 1960.

In 1950, Baker Electric built a new building at 7th and Center Streets. The building was approximately 2000 sq. ft. The company was there until 1975 when it moved to its present location at 111 Jackson Ave. Gene bought 4 lots with houses on them, tore the houses down and built there.

Britt Baker, Gene and Phyllis Baker’s son, came to work for the company in 1973 as an estimator. Britt became President in 1986 and CEO in 1996.

Dave Hearn joined the company in 1979 and became President in 1996. Dave retired in 2015 and Don Stockton succeeded him as President.

Commercial projects have always been a majority of Baker Electric’s work, but through the years, the Company has grown to one of the largest electrical contractors in the Midwest.

Network cabling, underground installations, traffic signalization, residential facilities of all types and expanded service department have allowed the company to provide complete electrical service to their large client base.

And to quote Gene and Britt Baker: “We are proud of the Company we have built together, along with our management team and valued employees, and look forward to continued growth in the years ahead.  We are most grateful for our customers and friends who have contributed to our success and have helped the company grow for the past 63 years.”